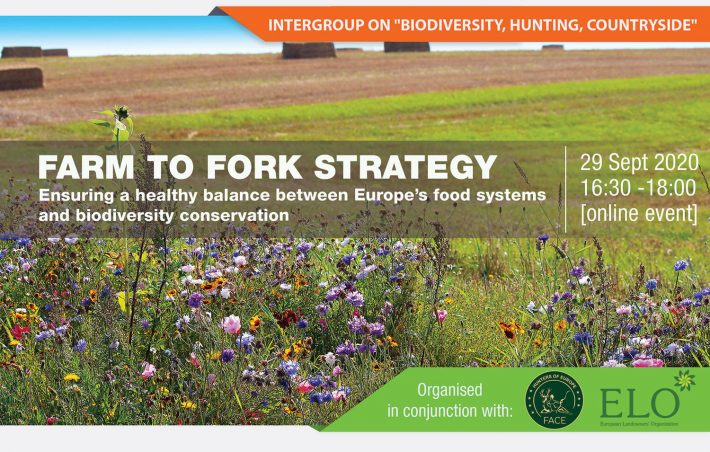 On 29 September 2020, the European Parliament’s “Biodiversity, Hunting, Countryside” Intergroup held a high-level conference on the “Farm to Fork Strategy: Ensuring a healthy balance between Europe’s food systems and biodiversity conservation”.

MEP Álvaro Amaro, who chaired the meeting, introduced the ambitious targets set by the Farm to Fork Strategy (F2F). While defining the strategy as “comprehensive and exhaustive”, he underlined that many questions on how to implement the targets without putting unjustified burdens on farmers remain open: “Without a balanced proposal, we risk creating structural disruptions with serious social and economic consequences”. He concluded his intervention, stating that “our Intergroup, here in the European Parliament, will continue to be very active following the dialogue between the European institutions concerning this strategy, having in mind – always – that without the farm there is no fork…”

MEP Jérémy Decerle stressed to achieve the targets set in the F2F, it is essential to involve rural communities, in particular farmers, which have to implement these targets. Speaking as the Renew Europe’s shadow rapporteur for the Common Agricultural Policy (CAP) file on Strategic Plans, he underlined that the eco-schemes proposed under the next CAP must support farmers in the transition towards sustainable food systems.

MEP Carmen Avram emphasized that hunters have long witnessed the dramatic decline of wildlife, in particular: small game, pollinators, and plant diversity in agricultural areas. Hunters are very active in conserving biodiversity on Europe’s farmland, as reported annually by the FACE Biodiversity Manifesto. However, reversing biodiversity loss requires a more considerable effort and it can only be successful if there is a strong political will to adopt a new approach. Farmers are precious allies and should therefore receive support, when facing the challenge of making EU food systems sustainable.

Ms. Alexandra Nikolakopoulou, Head of the Farm to Fork Strategy Unit in the European Commission’s Directorate-General for Health and Food Safety (DG SANTE), provided an overview of the F2F’s goals and objectives. She underlined the social, environmental and economic challenges linked to EU food systems, which the F2F wants to address. Referring to the links between the next CAP and the Green Deal, she highlighted the need for compatibility between these two policies and mentioned the commission staff working document on the analysis of the cap regarding its compatibility with the F2F objectives. She added that the Commission will assure coherence between the F2F, the Biodiversity Strategy for 2030 and the new CAP, by making recommendations to each Member State before the official submission of their national CAP Strategic Plans. This will ensure that the targets stemming from the two strategies are fully taken into consideration.

Emeritus Prof. Allan Buckwell, Research Director Rise Foundation, focused on aspects that the F2F does not fully address, namely the de-intensification of the agriculture sector while increasing space for biodiversity and guaranteeing food security at the same time. Commenting on the 25% target for organic farming established in the F2F, he affirmed that when discussing sustainable agriculture, the debate should focus on the contribution of new technologies, such as: gene editing and new plant-breeding techniques, to make the transition towards sustainable food systems.

Dr. Francis Burner, Senior Conservation Scientist and Head of PARTRIDGE Interreg NSR project, highlighted that farming and biodiversity can co-exist. He provided an overview of the PARTRIDGE project, which aims to show what management solutions can improve biodiversity and ecosystem services by a minimum of 30% by 2023. The project involves different partners such as researchers, farm advisors, conservationists, hunters, civil servants and farmers with including real life examples on how targets are being reached.

With an exceptional attendance of more than 250 online participants, the meeting was moderated by the Brussels-based journalist Brian Maguire and organised in conjunction with FACE-European Federation for Hunting and Conservation and ELO-European Landowners’ Organization.

Recording of the meeting as well as speakers’ presentations will be available soon on the Intergroup website: www.biodiversityhuntingcountryside.eu