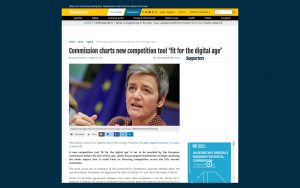 A new competition tool ‘fit for the digital age’ is set to be unveiled by the European Commission before the end of this year, which has prompted stakeholders to begin analysing the wider impact that it could have on fostering competition across the EU’s market economies.

The move would see an extension of the Commission’s competition capacities defined within the current antitrust framework, the legal basis for which is Articles 101 and 102 of the treaty of the EU.

Article 101 prohibits agreements between firms which stifle competition in the EU. Article 102 is designed to address the abuse of dominant market position within the internal market, honing in on practices such as unfair trading terms, limits to production at the disadvantage of consumers, and inconsistent conditions applied by certain firms for different clients.

The current rules have led to billions in antitrust fines being slapped on some of the world’s largest companies in recent years, including Google, Intel, Qualcomm and Microsoft.