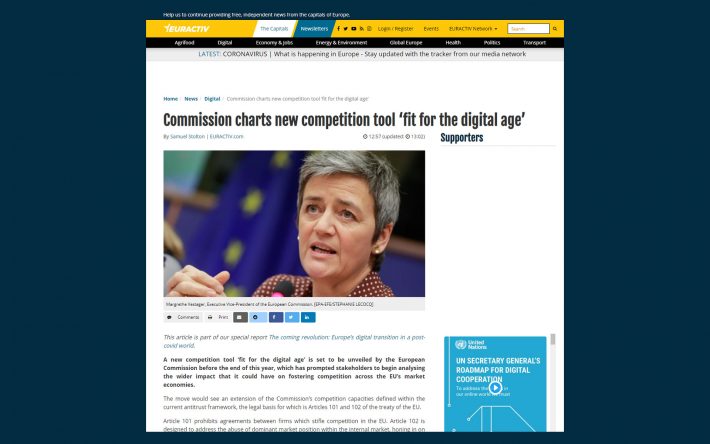 A new competition tool ‘fit for the digital age’ is set to be unveiled by the European Commission before the end of this year, which has prompted stakeholders to begin analysing the wider impact that it could have on fostering competition across the EU’s market economies.

The move would see an extension of the Commission’s competition capacities defined within the current antitrust framework, the legal basis for which is Articles 101 and 102 of the treaty of the EU.

Article 101 prohibits agreements between firms which stifle competition in the EU. Article 102 is designed to address the abuse of dominant market position within the internal market, honing in on practices such as unfair trading terms, limits to production at the disadvantage of consumers, and inconsistent conditions applied by certain firms for different clients.

The current rules have led to billions in antitrust fines being slapped on some of the world’s largest companies in recent years, including Google, Intel, Qualcomm and Microsoft.

Nevertheless, at the start of her mandate in November 2019, Vice-President Margrethe Vestager was tasked by President Ursula von der Leyen with reevaluating the EU’s competition policy framework, making it “fit for the digital age”.

In this regard, the Commission now recognises that there are gaps within the current framework and a new tool is required to facilitate “timely and effective intervention against structural competition problems across markets”, as stated by an inception impact assessment recently published by the EU executive.

In this vein, Nicolas Petit, Joint Chair in Competition Law at the European University Institute and the Robert Schuman Center for Advanced Studies, recognises the plans as improving the conditions of markets, rather than penalising specific anticompetitive practice.

“The point is to create a market optimisation tool, to solve competition problems that currently fall through the cracks of Treaty provisions. Existing rules catch bad conduct, understood as business behaviour with anticompetitive purpose or effects,” he told EURACTIV.

“The Commission seems to believe that some markets display structural problems, short of bad business conduct. The point is to allow the Commission to intervene in order to improve market competition, not to remove bad business behaviour,” Petit said.

He added that the goal of the executive in this regard is to act “below the threshold required for standard competition infringements, and below the radar of of strict judicial review.”

Along this axis, the new tool will be designed to mitigate structural risks in markets as well as intervene in situations whereby a market is close to ‘tipping.’

In competition terminology, market tipping refers to the situation where one company obtains high monopoly profits and market share, creating an anti-competitive environment for other firms.

The Commission envisages that the tool would impose structural remedies to competition imbalances, but will not rule on infringements or establish fines.

Furthermore, ‘speed’ in responding to markets nearing such conditions would be another function of the tool, and such an aspect would be a welcome addition to the EU’s competition policy framework, believes S&D MEP Carmen Avram, shadow rapporteur on the Parliament’s annual competition report.

“The main objective for the new competition tool is to be able to deal more effectively and faster with digital antitrust and merger cases in particular,” she told EURACTIV.

“As we have seen with the Google shopping antitrust case, the case started over 10 years ago and we are still waiting for the end of the case, in the meantime fair competition, self-referencing or non-discrimination in search results are still non-resolved issues with many competitors that doesn’t exit any longer.”

The first task at hand for policy experts within DG COMP will be to define the criteria for what constitutes a ‘tipping market,’ a specific area in which bureaucrats are currently investing a lot of time, EURACTIV understands.

Nicolas Petit said it would be “very hard to say” what would entail a fair definition of a tipping market, adding that “for instance, is the videoconferencing market prone to ‘market tipping’? No one can really say today.”

“We forget that we often talk of market tipping with the benefit of hindsight. That’s why a more promising target for the tool is to focus the tool towards markets that have tipped to one or a small firms, like perhaps app stores,” Petit, who is soon publishing a book entitled Big Tech and the Digital Economy, added.

“In this sense, a tipped market can be defined as one in which a product, firm or standard has won the game, uncertainty has disappeared, and there is a lot of inertia meaning little entrepreneurial effort, investment and innovation,” he said.

While publicly DG COMP is pitching the new tool as a general purpose instrument, its application is likely to be most evident across the platform economy – digital markets harbouring many of the characteristics such as ‘extreme economies of scale and scope, strong network effects, zero pricing and data dependency’ that the Commission would like to address.

For MEP Carmen Avram, minds should be focused on the structural problems to the digital sector in particular, and she would like to seek complementarity between the new competition tool and the upcoming Digital Services Act.

Vice-President Vestager noted in May that the tool would feature prominently in the EU’s package of reforms which will attempt to regulate the online ecosystem.

“We should focus on the digital sector and the new competition rule should be directly linked to the Digital Services Act (DSA) ex-ante general ground rules where basic principles are given to the platforms,” Avram, who has regularly pressed the Commission for answers on dominant platform abuse, told EURACTIV.

“In particular the systemic platforms in instances where you cannot self-preference your own services over the services of competitors and where you cannot prevent the consumer from switching or choosing another service or competing app.”

“Greater transparency and control should also be given to the consumers over their choice over their data and data portability,” she added.

Consultations on the tool were launched at the beginning of June, and are open until 8 September.

Competition policy is an area of the Commission’s DSA initiatives in which tech giants are said to be most concerned about the EU’s future direction.

While President von der Leyen made it a priority at the beginning of her term to achieve European digital sovereignty, the functioning of the new competition tool could go a long way toward rebalancing markets that are currently dominated by firms that suppress the growth of European players in the digital ecosystem.