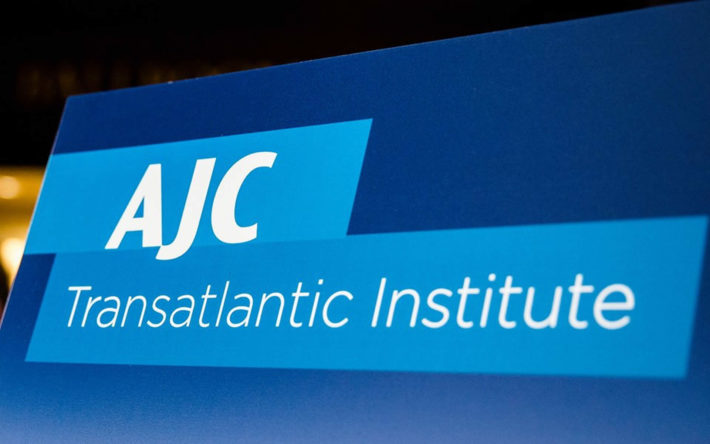 Brussels, 15 October 2019 – The AJC Transatlantic Institute joins a cross-party group of Members of the European Parliament in condemning far-left lawmaker Miguel Urban for hosting in Parliament Ines Maestro, a former MEP with links to the EU-designated terror group Popular Front for the Liberation of Palestine (PFLP). Maestro is currently under investigation in Spain for financing terrorism, specifically for transferring funds to Leila Khaled who was involved in two deadly hijackings.

On the initiative of Austrian MEP Lukas Mandl (EPP), Belgian MEP Frederique Ries (Renew Europe), and Romanian MEP Carmen Avram (S&D), the letter calls upon the President of the European Parliament, David Sassoli, to “take measures in order to prevent that the European Parliament supports and promotes such activities within its walls in the future.”

On 8 October, the Spanish MEP Miguel Urban invited hundreds of lawmakers to today’s event with Ines Maestro. In the invitation, Urban said: “In 2014, (…) Nines Maestro (…) with a bank account in her name, helped raising funds for Gaza hospitals sent to the Popular Front for the Liberation of Palestine (PFLP) and the Palestinian Authority. In 2017, two Zionist organizations from the United States and the Spanish State denounced Nines and other companions before the Spanish National Court, who opened cause for “collaboration with a terrorist organization.”

„We commend the three MEPs for initiating this important letter protesting against the event. The European Parliament isn’t a soap box for terrorists or their sympathizers. We are confident that President Sassoli will make the right decision,” said Daniel Schwammenthal, Director of the AJC’s EU office, the AJC Transatlantic Institute. “Already two years ago, far-left EU lawmakers of the same political group hosted Leila Khaled herself where she was cheered on for her crimes. At that same event, Khaled besmirched the memory of the six million Jews murdered by the Nazis and demonized Israel by likening the actions of the Jewish state to the Holocaust,” Schwammenthal added.

In the aftermath of Leila Khaled’s September 2017 talk in Parliament, then-President Antonio Tajani issued a strongly worded letter: “I have reminded the members of the European Parliament as well as Parliament’s General Secretaries that every effort should be made to ensure that no listed person for representatives and entities mentioned in the Council are invited or admitted to Parliament nor promoted through event or audio visual means.”

Lukas Mandl, who also heads the Transatlantic Friends of Israel (TFI) friendship caucus in the EU legislature, said: “You can’t stand by and watch the European Parliament become the venue for attempts to justify terror. Terror against Israel is terror against humanity. And for us in Europe, it’s terror against our friends. We thus strongly condemn the abuse of our Parliament for anti-Israel events. Israel is the only rule-of-law democracy in the Middle East, and its security forces ultimately also provide protection and security for EU citizens on a daily basis.”

Frederique Ries, a founding Vice Chair of TFI, said: “It’s a disgrace that our democratic house is being abused for nefarious purposes. As Europeans, we support a negotiated two-state solution. Associating oneself with terrorists like the PFLP is not only immoral but also a disservice to what ought to be our common goal: Promoting peace between Israelis and Palestinians.”

Carmen Avram, a member of the centre-left Progressive Alliance of Socialists and Democrats group in the European Parliament, said: “Inviting anyone associated with an organization or individual on the EU‘s terror list in the house of European democracy isn’t a good precedent.

What message do we send to the world? What message to we send to victims of terrorism in Israel and victims of terrorism in general? Actions such as the one of Miguel Urban could damage the reputation and credibility of the entire house. This must never happen again. We must stand united against terrorism and antisemitism in all its forms, in particular today in Europe just after the German synagogue attack.”