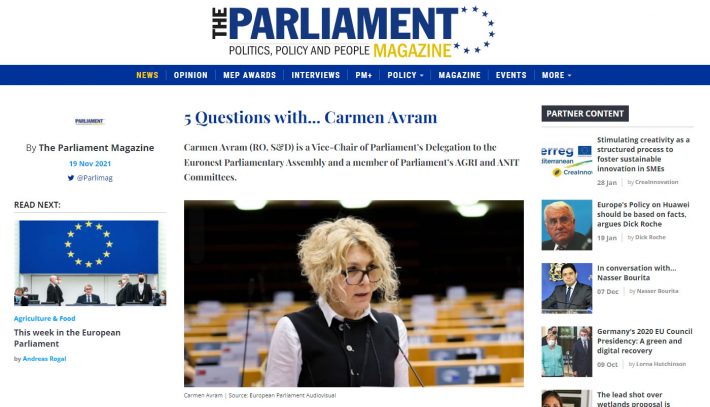 1. Who have you worked with that has most inspired you in your career, and how?
It was the owner of the very first TV station I’ve worked at. He was a man ahead of his time, with an original perspective on video, sound, message, subject approach, storytelling and personal attitude on camera. He was trained as a film director, so his ideas were groundbreaking for the Romanian media and brought our team many awards, including on important international competitions.

2. What one item would you save from your house or apartment/house if it was on fire? (Apart from your photo album)
Zuzu. My cat. If, fast as he is, Zuzu would have already left the building.

3. What is the smallest change you have made in your career that has had the biggest positive result?
As a beginner in television, I volunteered for a press conference at the Israeli Embassy in Bucharest. That turned out to be the cornerstone of a very long and very interesting career as a special correspondent for the Middle East and different conflict areas. That press conference changed my life in more ways than one.

4. Is there anything you have personally achieved or done that would surprise people?
In 2009, in Los Angeles, three days after Michael Jackson’s death, I managed to find and interview his father, at a moment when no media outlet in the world knew where he was hiding. It was not the interview of a lifetime, and Mr. Joe Jackson didn’t strike me as a very nice person, but the way I found him is in the Top 10 amazing stories of my journalistic career. Details in my Memoirs. Yet to be published. Yet to be written.

5. What was the most inspirational and influential book you have read and why?
In literature, “Love In The Time of Cholera”, by Gabriel Garcia Marquez. Being passionate about storytelling, it taught me a lot about (love, yes, but mostly about) how to build a character and help it evolve with the story. And also how to leave a reader (or an audience) with the feeling that no other word in the world would be necessary for that story to be complete. Otherwise, “How To Run The European Parliament” is a constant inspiration, although I didn’t get to run the Parliament. Yet.